There are not many places on this Earth where I have been buried alive and yet at the same time been able to see the far horizon. The tunnels at Newhaven Fort are one such place. On 17th December I had the privilege of accompanying underground the Custodian of Newhaven Fort, Steve Watkins, Lewes District Council Rangers Dan Fagan and Thyone Outram and Tony Hutson from the Sussex Bat Group. The purpose was to survey the accessible areas for hibernating bats and Lepidoptera. Along the way we saw only two Brown Long-eared Bats (Plecotus auritus), plenty of spiders, including many Amaurobius (probably fenestralis) which were active in the shady, damp, mild habitat. I didn't attempt to identify the spiders, but I was able to record a pleasing total of 110 moths and butterflies. 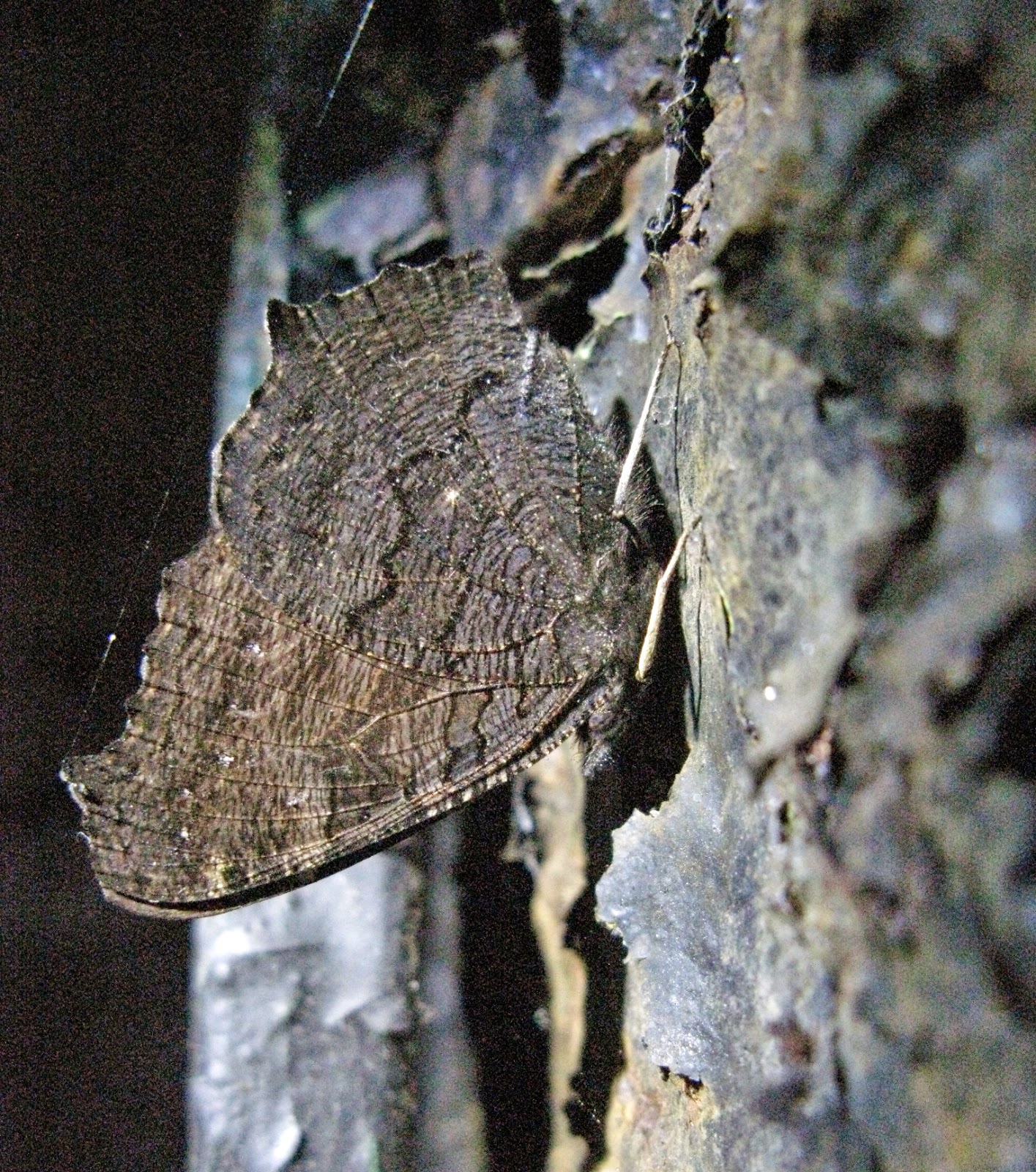 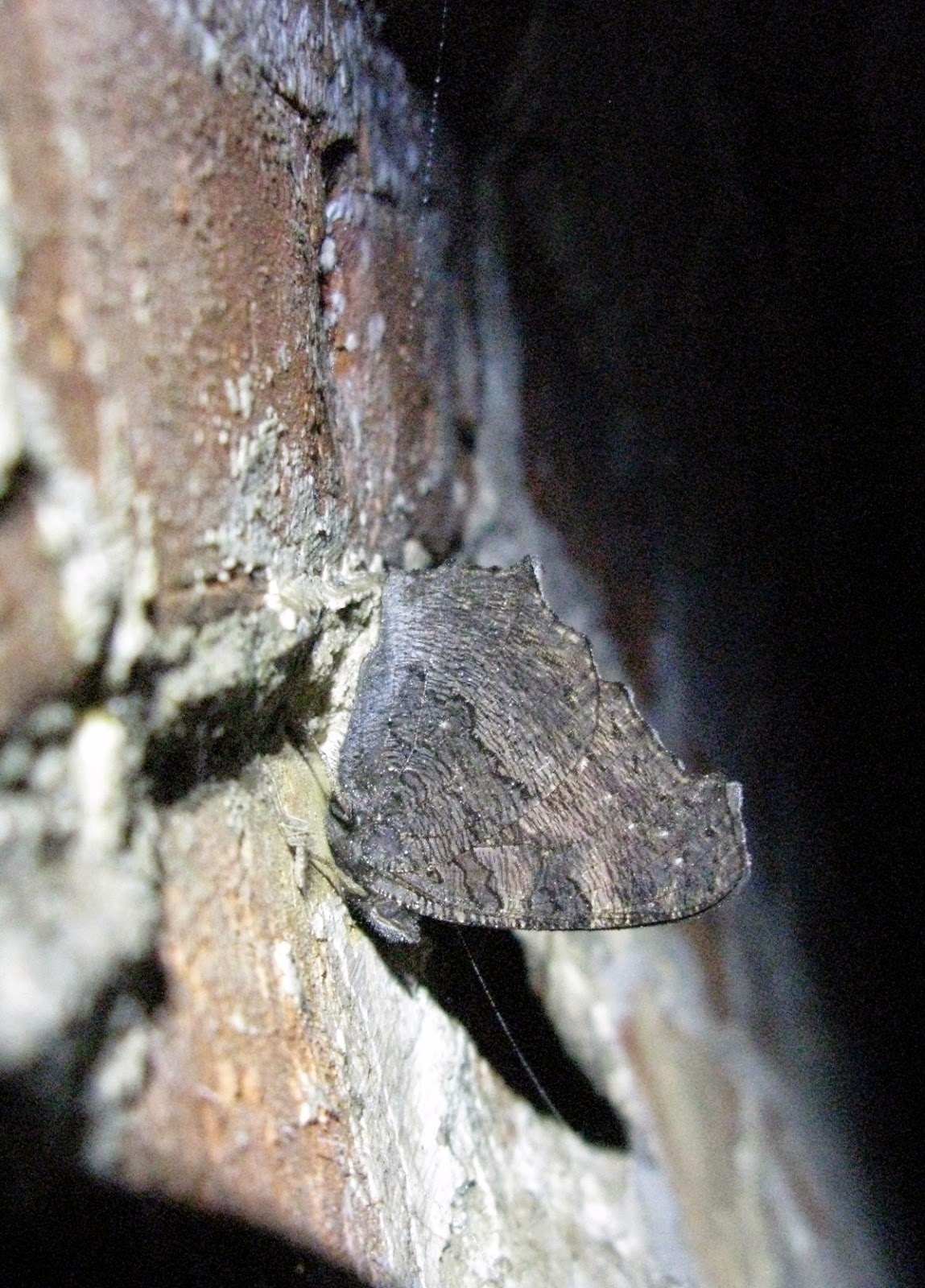 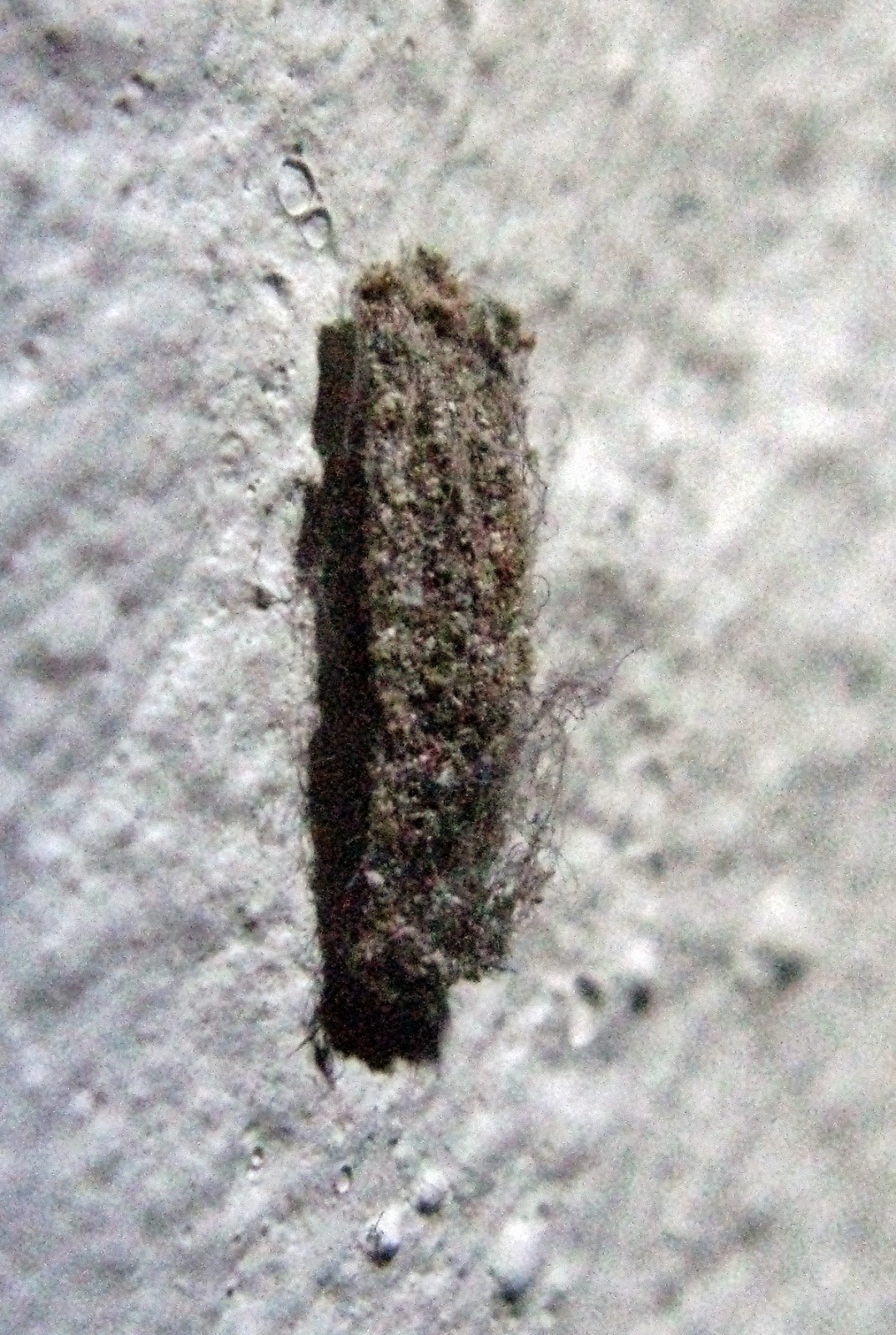 This initial survey is hoped to be the first of a regular annual survey and some interesting data was collected to compare with what we see during future visits. The Case-bearing Clothes Moth (Tinea pellionella) larvae (pictured right) were, like most of the invertebrates we saw, close to the entrance and exit of a tunnel. They are likely to be feeding on natural fibres from rabbits or possibly birds nests, of which there are plenty of both within a short distance of where we saw them.

The only species we saw which was deep within a tunnel was Digitivalva pulicariae - the Fleabane Smudge (pictured below), and the three we saw were close together in a location which was roughly beneath the moat adjacent to the main car park. It is likely that they fed during their larval life stage on hemp agrimony (Eupatorium cannabinum), which has a fairly dense population on the adjacent Castle Hill Local Nature Reserve. How and why did they retreat to such an inaccessible part of the tunnels?


Common Flat-body (Agonopterix heracliana) and Twenty-plume Moth (Alucita hexadactyla) are both very well known to hibernate overwinter as adults and to emerge when the day length and temperature increases the following spring. Both species have visited my moth trap on warm winter nights. It was no surprise to find these species within the tunnels, nor The Herald (Scoliopteryx libatrix) - one of the better known hibernators which, in its mimicry of a curled autumn leaf, could easily be mistaken or altogether missed.


Each of these species was a welcome sight during the lean winter months, but the value of this survey, the benefit of having made the effort to survey the tunnels, was seen in the fourteen Bloxworth Snouts (Hypena obsitalis) that we counted. This is a remarkable number.

The Bloxworth Snout in Sussex 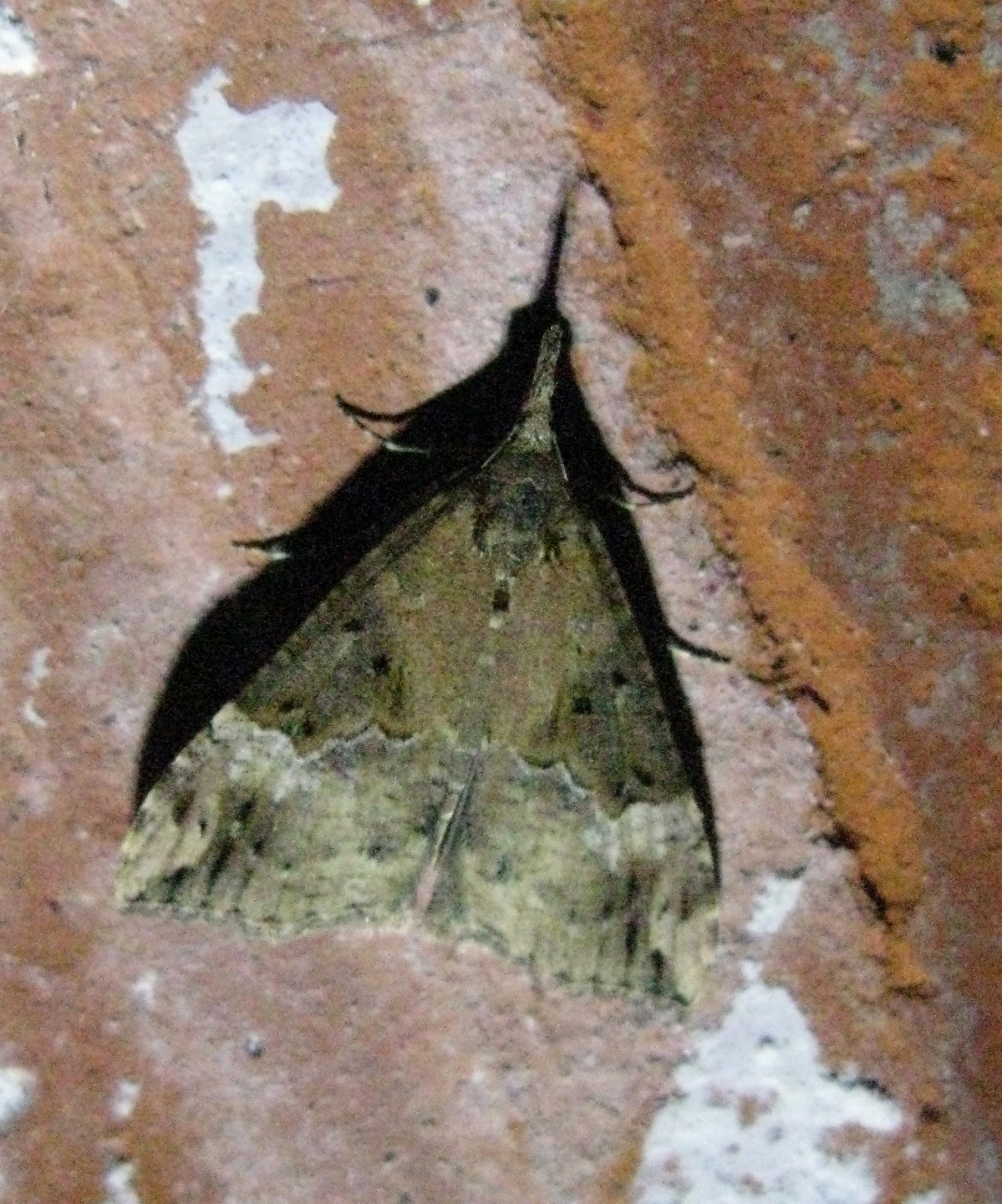 Back in November, when the Newhaven Oleander Hawk-moth was making headlines, following its discovery by Steve Watkins and his colleagues, we (Thyone and me) had seen two Bloxworth Snout in the entrance tunnel to the Fort - the same location as the Oleander . They were at rest on the wall, a male and female. I suggested that the tunnels might offer a suitable hibernaculum for the species and, although we had previously decided that we should survey the tunnels, we made this species our main subject of interest. We were well rewarded. I would first like to place this in context.

I saw my first Bloxworth Snout in March 2010. It was an adult which had emerged from hibernation in the basement car park at Southover House in Lewes. It fluttered into my face as I walked out of the door, but came to rest for me to identify from a photograph I was able to snap. 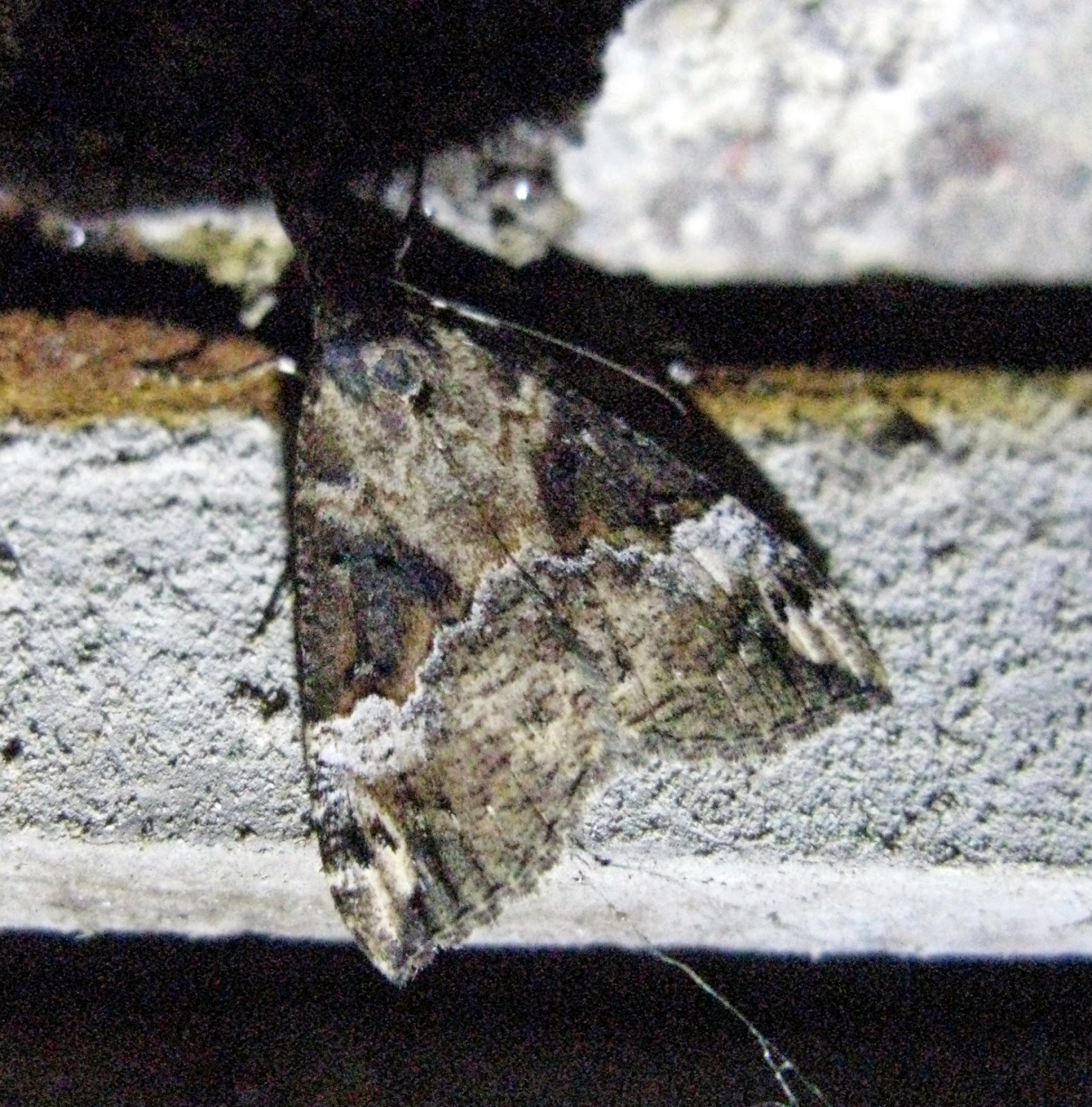 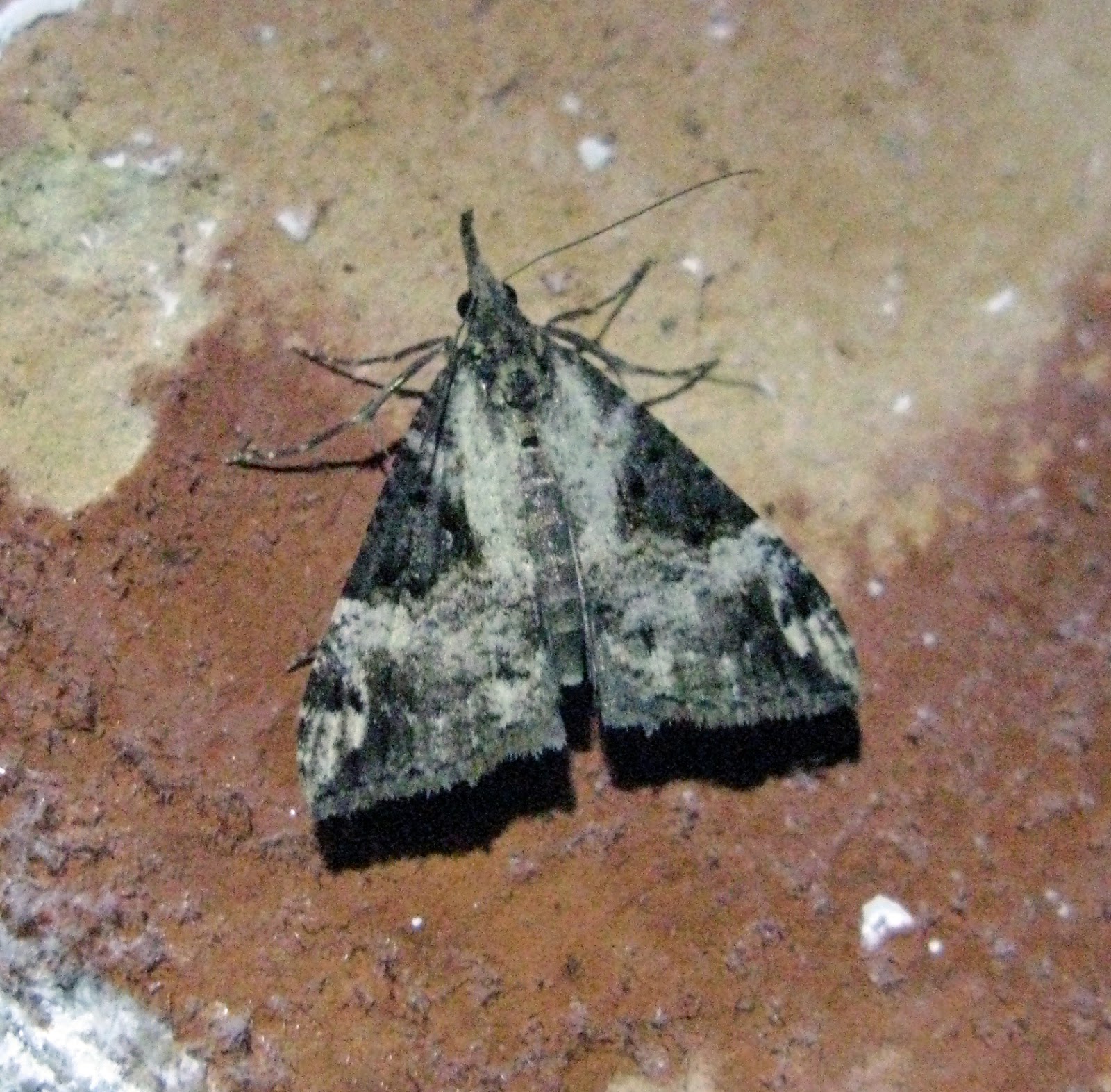 Since 2010 I have seen it as a singleton on a further three occasions: at home in November 2012, when I saw one at rest outside of my kitchen door, at home again in July 2014 (an example of a second brood emergence?) and then up at the Fort in November 2014.

Using Colin Pratt's Complete History of the Butterflies and Moths of Sussex (2010) as a reference, the Bloxworth Snout was first recorded in Sussex in 1983 - in a garage at Houghton Green near Rye. One further 20th century record was made in 1997 at Littlehampton. A further five records were made between 2000 and 2009 before my moth flew into my face in Lewes. That adds up to a total of eight moths seen up to 2010. These records have led Colin Pratt to surmise that the moth, previously considered to be a scarce immigrant from continental Europe, was resident in the county by the turn of the century, if not before. All these sightings were singletons.

Between 2010 and 2013 the moth was recorded a further twelve times. Again, each of these reported sightings were of single specimens. This means that a total of twenty Bloxworth Snouts had been recorded in Sussex throughout its entire history in the county to the end of 2013. The brace that Thyone and I saw on 26th November this year was, it seems, the first recorded occurrence of two individuals in the same place at the same time.

The species is clearly becoming more widespread and a more regular visitor to Sussex-based Lepidopterists. This brings us up to date and the available data (excluding any records made during 2014) suggests that the species has a strengthening toe-hold along the Sussex coast. This was the situation as we entered the tunnels on 17th December: a total of 22 known adults previously recorded in the county.

This background helps to place the fourteen specimens we saw in the tunnels into context. It is a significant record which hints at the actual number of adults which may be present elsewhere in the tunnels at Newhaven and indeed along the Sussex coast. It is difficult to estimate how many of the fourteen moths were immigrants, but it is reasonable to suggest that most, if not all, are native to the cliffs at Newhaven, where they would have fed as larvae on either pellitory-of-the-wall (Parietaria judaica) or other Urticaceae species such as nettles. For those who are interested in climate change and the impact upon invertebrate species, the Bloxworth Snout would be a fascinating species to study and I suspect it will be recorded more frequently and in increasing numbers in the future.

I don't have that much data for records outside of Sussex, but I am currently aware that only Guernsey has returned greater numbers of the Bloxworth Snout, where the species is regularly seen in and around fortifications similar to those on the cliffs at Newhaven. I would strongly encourage the reader to seek out and survey any tunnels that you may gain safe access to, particularly in a coastal situation, in order to add to the knowledge of the Bloxworth Snout and other hibernating species. I will look forward to continuing this work in Newhaven - and I would happily join you elsewhere if you would like the company!