The rain is beating furiously against the windscreen of our Ford Focus. All three of the dogs are in the back and we are making our way north of Newhaven to the base of Itford Hill. It is a late-March day of sun punctuated by cloud and heavy rain and with a wicked Channel wind blowing strongly up the hill which looms above us. It seems to lean back with the wind as we view it from beneath in the car. The rain stops as we reach the YMCA and, as we walk away from the car park, the cloud is breaking to reveal blue sky. Jackdaws and herring gulls wheel above us, fighting against the wind.

Itford Hill is a special place. As one climbs its meandering ox-bow path up to some tumuli which mark the end of the steepest climb (or the start of the steep descent, depending on one's bearing), and then to look across and down into the Ouse Valley, one can begin to understand why our Neolithic ancestors chose to bury their dead here and along the apex of the downs. Itford Hill is exposed on three sides and, on the plateau as one continues east beyond the tumuli, the vista is remarkable with Newhaven in its industrial splendour to the south, at its best when seen from a distance, and the Ouse Valley snaking its way north towards Lewes. The downland escarpment which forms the west bank of the valley offers a dramatic colour contrast to the surrounding land on any day. Up here on the east side, there is a quality to the light which makes one wonder whether it has been borrowed from the sea or from what John Wyatt once described as the shining levels, which lay low and genuflect and reflect before Itford, their reflected stillness a stark contrast to the fury of the wind up here. Whatever one's persuasion, the resting walker might stand here and wonder if their climb has brought them closer to heaven - perhaps similarly to our Neolithic forebears.

The three-sided aspect of Itford Hill exposes and seems to confuse or even overwhelm the senses which some people, myself once included, might describe as disturbingly awe-inspiring. I used to feel the heebie-jeebies walking up here years ago, until familiarity bred it out of me. Looking down on the ghostly space which once formed Asheham, I understand perhaps the same haunting sense of foreboding that the Woolfs admitted to during their time there. Some have questioned whether Asheham was itself haunted, but I believe the whole of Itford has a haunting quality about it; not so much a malign force as a perhaps an awesomeness which indelibly marks the imagination. It certainly is an inspiring place which leaves its mark upon the visitor, as it did to the Woolfs and their visitors to Asheham.

Standing on top, one could imagine this as a Bloomsbury landscape: Asheham was demolished in the summer of 1994 and had stood vacant and increasingly derelict for decades before, becoming more ghostly in the process, enveloped in choking dust from the cement works; but Monk's House can clearly be seen as one amongst the huddle of roofs in Rodmell in the middle distance and, as one traces in the opposite direction the spine of the downs eastwards along past Firle Beacon, there is a bostal, unseen from here, which leads down to Charleston Farmhouse. Further still to the east, the spire of Berwick church is not quite magnificent enough to reach as far heavenward as the crest of the Downs. I fancy that Virginia Woolf pushed her bike from Southease up Itford Hill on her way to visit Vanessa Bell at Charleston and would without doubt have stopped to catch her breath and enjoy the view somewhere close to where we are standing. I have no idea whether this is a route she ever chose, but to me it is the most dramatic and rewarding and obvious - in good weather. Surely, she must have?

The strong, strengthening south-westerly wind is gusting to more than forty miles an hour and it blows us onwards. Exposed to the elements on top, the sky has suddenly blackened to the south and, as we watch over our shoulders, a curtain of heavy rain is pushed by the wind across the Ouse Valley towards us. We prepare to shelter from horizontal rain in the gorse at White Lion Pond but, remarkably, the rain passes to the south and we remain dry.

Everywhere above us skylarks sing unseen. Occasional flocks of meadow pipits lift into the breeze and then parachute back onto the turf. We turn south past White Lion Pond and climb the stile which delivers us into Well Bottom, a dry valley which leads downhill from north-east to south-west in the direction of the parish of Tarring Neville, where one will find two farms with associated cottages, a chalk quarry and a 12th century church dedicated to St. Mary, where congregations have gathered for 800 years or more.

Well Bottom is a remote scrubby, wooded gash, steep-sided and flanked on both sides by the kinder terrain of pasture and arable fields. Like the myriad other dry valleys which define the South Downs, Well Bottom was shaped at the end of the last ice age when melt-water eroded the chalk down to the permafrost to produce steep-sided escarpments which have never seen the plough. It is likely that sheep and rabbits halted vegetational succession and maintained a short-cropped turf until about sixty or seventy years ago. Agricultural intensification, smaller grazing herds resulting from cheap imports from New Zealand, changes in land use and, from the 1950s, myxomatosis are among the probable reasons which led to the colonisation of Well Bottom by scrubby plants such as bramble, hawthorn, sloe and gorse. Five years ago the scrub had nearly choked all of the grass and mixed flowers away. Only a narrow mosaic of wild strawberry remained, but the Grizzled Skipper (Pyrgus malvae), which feeds on the plant, was hanging on in sufficient numbers to inspire a call to action. This was taken up by the South Downs National Park Ranger Jan Knowlson. Jan has overseen a remarkable and dramatic improvement in the valley since about 2012 or 2013. A huge clearance operation on an industrial scale has taken place each winter and much of the cleared land has begun to be recolonised by grasses and flowers, including wild strawberry and dotted in places with retained mature ash and sycamore. Parts which were impassable in 2011 are now fully accessible thanks to Jan and her volunteers. The transformation cannot be exaggerated and the moths, butterflies and other insects we record here each year are testament to the value of protecting unimproved chalk grassland from scrub encroachment.

As we descend into the valley we pass two magnificent mature Ash trees (Fraxinus excelsior). The first appears the smaller, but it has clearly been coppiced at some point in its early life, so it may be the same age as the larger tree just below it. The sun is out, but the valley is aligned with the south-westerly wind and therefore offers no protection. It is unlikely that we will see any butterflies. A sheltered, sunny spot in late-March might tempt out a Peacock (Aglais io) or Small Tortoiseshell (Aglais urticae) to bask on the ground, or a Brimstone (Gonepteryx rhamni) or Small White (Pieris rapae) might dance their way along the valley bottom. Today we must be satisfied with beetles, including lots of seven-spot ladybirds (Coccinella septempunctata), which we find basking amongst low-growing stinging nettles and a spangled carpet of ground ivy. Picking our way along we find a pile of decades-old glass: milk bottles and a R. Whites bottle with its metal lid screwed on tightly. As lads we used to hunt these and deliver them to the sweet shop for their deposits.

Squares of bitumen felt have been laid out on the ground to survey the site for reptiles, but many of the squares have been blown around and folded over by the wind. I unfold and spread the wind-blown squares back out and weigh them down on their corners with a piece of flint. A stunning Common Lizard (Lacerta vivipara) rests beneath one of the squares. We watch it as it rests motionless for a moment before replacing the felt on the warmed soil. This is the first we have seen this year.
As we climb the western scarp to the gate we sit on the ground and take in the expanse of cleared land before us. A Fallow Deer (Dama dama) doe picks her way through the trees on the opposite side of the valley unseen by the dogs, but upwind of us, so we clip their leads on just in case. A minute or two later she emerges lower down along the valley bottom, leaps over some brambles and stops, alert, looking directly at us. We hope she is the first of more, but it appears that she is alone or the last of the herd to pass before us. She is back under cover within a few breaths and gone. We knew there were deer in the valley because we have found their roost and droppings in previous years, but this is the first sight we have made of a deer itself.

We have climbed out of the valley now, high above it and following the fence-line back towards the long plateau of Itford Hill. Two Common Buzzards (Buteo buteo) are taken by surprise as we approach downwind along a seldom walked but well-trodden sheep-poached track. We watch as they soar into the air and wrestle it under their control. They circle back towards us for a few moments to inspect our pack before gliding away into the distance.

A flock of white sheep have grazed their way across our path back down Itford Hill towards the foot-bridge, white and fluffy in a parody of the darkening skies to the south-west. We cut the corner and descend towards the path below, expecting the rain to lash us but, thankfully, this time it passes to our north and, as we stand and watch, Kingston and Lewes disappear into a rain haze under a leaden sky. The last of the milky sunlight is blown away from Itford and we hurry back to the car. The rain begins to beat down with force, but we are already in the car, dry and blessed, for a change, with the fortune of good timing. 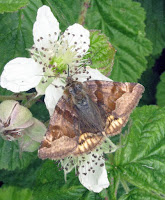 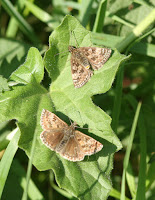 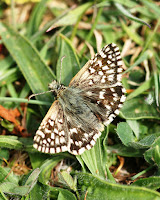 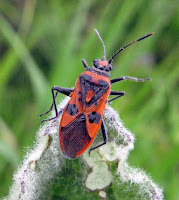 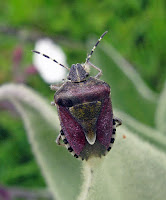