Psychogeography: the Peacehaven promenade as palimpsest

We determined to walk in about one hour the entire length, west to east, of the Peacehaven Promenade; not the windswept postcodes sitting high and dry along the cliffs above, but the sea defence: the brutalist concrete purdah which has veiled virginal white chalk cliffs from the furtive winks of the ruinous sea these last four decades.

We had astutely parked one of our two cars at Cliff Avenue - a psychogeographic derivation and terminus if ever there was one - and continued abreast westwards to the southern and rocky extent of Cairo Avenue, a namesake which conjures no comparison on this cold and windy day other than to suggest that this was our entry point, via the adjacent Howard Park slipway, to a maritime desert bereft of wildlife. We would descend and walk with the strong, cold, salt-laden wind at our backs back to the four steep flights of narrow steps beneath Cliff Avenue, inspecting as we did so fifteen lifebelts for their potential to offer asylum from the waves to any soul unfortunate or reckless enough to find themselves in need of extrication.

The defences have succeeded not only in prohibiting the eroding forces of sea and tempest; the non-human world has here also been made taboo, at least when the tide is high. The only exceptions to the intermittent staccato herring gulls and fulmars wheeling bereft and ledge-less above us were a lone rock pipit clinging grimly to the near-vertical concrete face, hunting for invertebrates (which, if they had once been present, had been blown elsewhere and eastwards by the wind), a single and rather magnificent pill woodlouse (Common or Southern I did not establish) hiding within the housing of a lifebelt and the occasional outcrop of garden-escaped wallflower and tree mallow and some other low-growing vegetation with which I was not familiar. This is not so much a hinterland separating the marine and terrestrial worlds as it is a vacant, sterile metropolis.

The promenade runs parallel to the base of the cliffs in a ruthless coastal parody and in affirmation of man's dominion over savagery. No doubt entropy will have its way, ultimately, but for now the Channel storms' only protest is to hurl stones onto the smooth roadway. These are periodically sucked up by the Council's Scarab (accessed via the Cairo Avenue slipway?) and redeposited, it appears, on the ramps which otherwise allow vehicular access to and from the shingle shelves that abut the concrete. In keeping with the psychogeographic theme, this tit-for-tat between storm and scarab creates a palimpsest which this winter would have been daubed in turn by Abigail, Barney, Coldagh, Desmond, Eva, Frank, Gertrude, Henry, Imogen, Jake and Katie. They all woz 'ere, but the scarab subsequently wiped clean all evidence of their presence and taught them all that resistance is futile against the concrete resistance laying between the sea and the chalk, whose Downland surface high above our heads sympathetically peaks and troughs its way inland.

Interactions are few as we gait our way eastwards: we pass a handful of intermittent dogs and walkers, including a blue-coloured Staffordshire preoccupied in carrying in its puissant mandibles a similarly coloured and similarly-sized flint pebble, both apparently equally hard as nails; also, a rather fearsome, mischievous looking mastiff cross which thankfully is kept on a short tether, presumably for the benefit of all others as well as its own. Passed also are a pair of young adults kicking a ball into but not past the impenetrable concrete defence. A lone jogger jounces her way past eastwards and, moments later, westwards. With only one cheerful exception, all these people are recondite in solitude, cast adrift by choice onto their personal islands. None seem curious about the fact that we stop at each lifebelt to inspect and photograph it. If we threw one at them, remembering to keep hold of the end of the rope, they would probably not even trip over it, let alone throw it back at us. So we don't.

We complete our promenade in just short of seventy minutes. The waterfront is replete with lifebelts ready for use, should they ever be required. We turn our backs to the sea and ascend the cliff to Cliff Avenue. One day the battles won by the concrete and the scarab over the softly, softly eroding sea and storms will be forgotten. It is an awesome consideration that the sea has on its side the entropic forces of time. Victory in battle, imagined or real, is nothing when one knows that the war will have only one victor. In arresting the successive forces of nature, we humans can win only a stay of execution. Nature always finds a way. 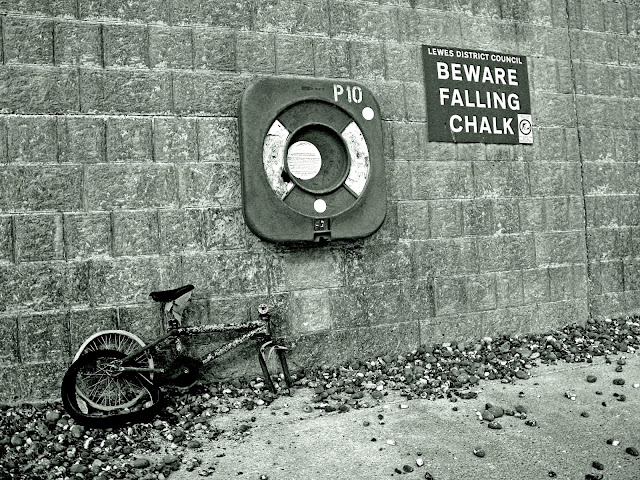 The Monotony of Safety 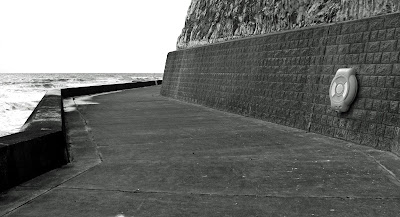 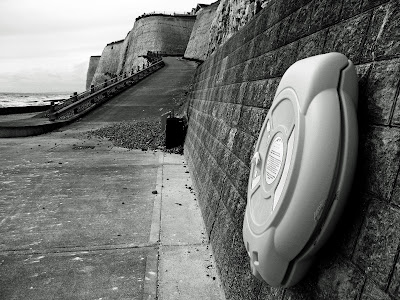 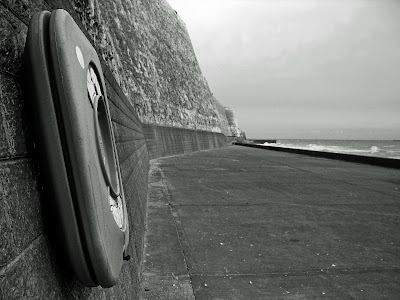 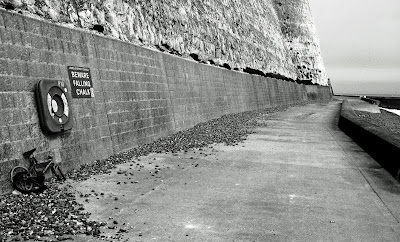 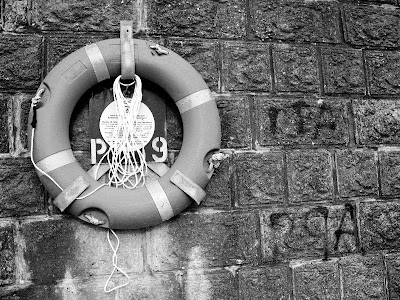 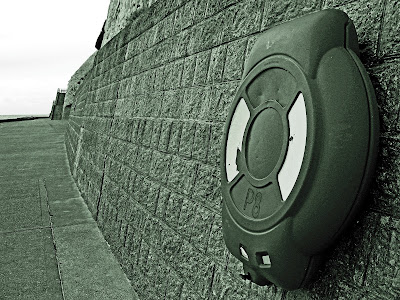 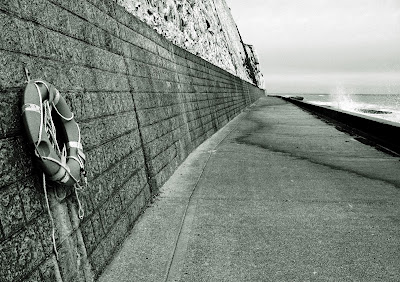 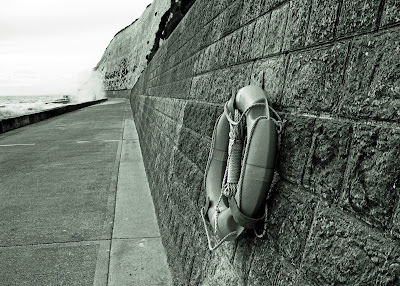 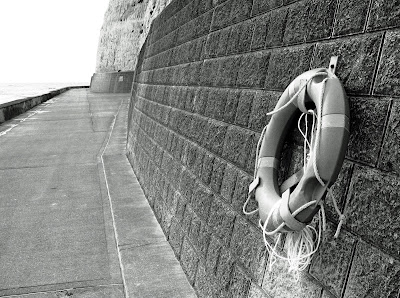 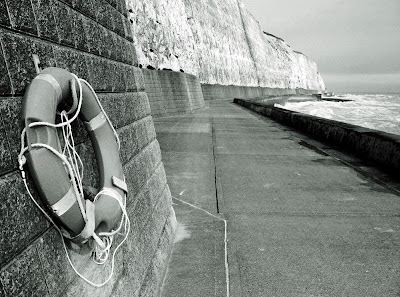 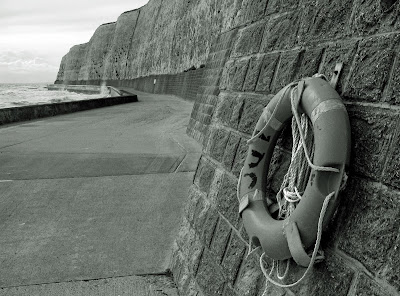 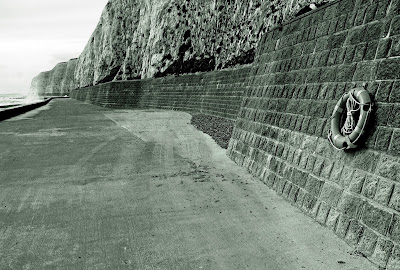 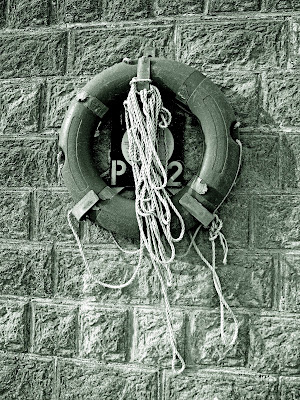