Chafers beneath a full moon 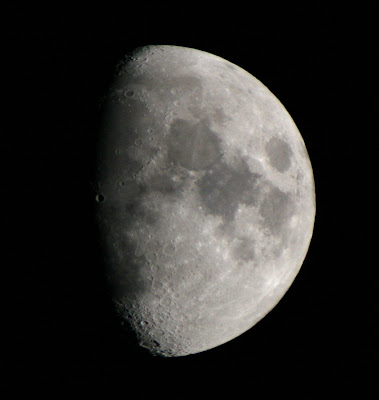 Everything lost on Earth is to be found on the Moon*, not least the light of day.

The moon is waxing gibbous tonight and, on Thursday at 8.15pm, it will rise full as it does every twenty nine or so days. This event won't be a so-called 'Supermoon' (we will have to wait until November for the next one of those) but the wave of awe in witnessing one of nature's spectacles will sweep across the Earth, like the tidal bulge, and be no less felt in the event of the ordinary full moon moonrise than it is during those occasional superevents. Some feel the draw of the moon more than others, but it is a rare person who is not at all struck by the event whenever the full moon breaks over the horizon and arcs across the night sky.

The night of a full moon is something that we like to celebrate in special places, where a tangible connection between the earth and the heavens might be more strongly felt. Last September, when the full moon achieved supermoon status, hours before it slid into the totality  of a lunar eclipse, we trekked up to The Bridestones which rise high up above the Dalby Forest in the North Yorkshire National Park. We watched the drama unfold as we caught our breath, only to lose it all over again at supermoonrise. Hours later our alarm woke us so that we could take in the eclipse from the cottage garden in Cropton.

Last month's full moon moonrise was one of those occasions when our planets aligned and we had the chance to mark the occasion together. We were at home - this time in the South Downs National Park - and we chose one of the more pagan patches of Down close to home: Combe Hill, which overlooks Willingdon. We chose a favourite circular route from Jevington which follows the gentle progress of the southern downland slope up to the crest of the Eastbourne Downland. This rewards the walker with magnificent coastal views to the south and east before the northbound path carries you onto Combe Hill - itself a constellation of enclosure and satellite barrows or tumuli, which once would have shone their chalk-white light across the land like novae of spent lives remembered, their fading light slowly melting into the downland turf along with the old religion as the parish church replaced the older ways and became the new centre of the human universe. 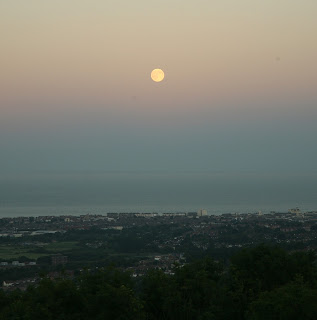 The moon rose as we passed Butt's Brow. We watched it breach the horizon and climb above the Channel and brighten in magnitude as the dusk stretched its fingers out of the west. There is a near-tactile energy in moonlight which reveals the character of the land - something which is blinded by daylight. History seems to congeal and reanimate, rise up out of the soil and array itself before us in the gloaming. Daytime winds fall away with the light; the synergy of sticky silence, the moonlight and the long line of history crystallise in the imagination in this crucible. The moon is the key ingredient: the light of its fullness casts a reverent spell; reverence of nature, of the land, of the history of the place. The people who have farmed this land, our ancestors, we have all borne witness to this same moon, rising cycle after cycle, lunation after lunation. The moon is part of the glue which binds us. That moment beneath the full moon bears witness to all of history so that it exists as if all of time is captured in the moment. We are the end link in a chain of 200 or more human generations which stretches back unbroken into the depths of time. The connection is strongly felt. How appropriate it is that moonlight inspires within us such a moment of reflection. The moon is lighting our way in growing influence now as we walk from Combe Hill back towards Jevington. The land is ancient and anything greater than a single ploughshare drawn by a pair of oxen seems out of place. The daylight splendour of the flower meadow is dimmed as the last of the light falls away into the west. As the trees reach up and embrace Neolithic lynchets, swarms of summer chafers envelope us and we marvel at their lunatic dance around the tops of bushes. Thousands emerge from the ground around us as if summoned by the full moon, like terrestrial coral polyps. These are creatures of mid-summer, but often mistaken as Cockchafers ("the Maybugs are late this year", I am told most midsummers). The summer chafer's scientific name is Amphimallon solstitale, the latter meaning 'of midsummer', of the solstice. Known also as the June Bug, it is a beetle which swarms at dusk, sometimes in impressive numbers. Much smaller than the cockchafer, it has a habit of flying aimlessly and harmlessly around you, and bouncing into you, with a fierce-sounding buzz, before attaching itself to clothing and bare skin. The worst it can do is cling on and make a nuisance of itself with its remarkably strong grip, but even then it is painless to remove. As we walk along, more than a dozen alight on my arms, legs and head, some in copulating pairs, like a scene by Bosch, sent mad by the moon above. 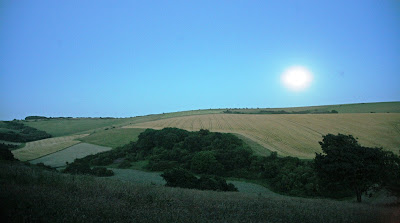 The chalk path leading back out of the dreamy landscape was painted silver. We approached Jevington through the pasture at Cloth Farm feeling vaguely aware of our insignificance. The life-giving moon, sister of the Earth, without which there would be no tides, no seasons, has waxed full and waned again month after month, gazed upon by countless species on the land and, for longer still, within the seas, and back further still into deep time. Our link and the two hundred stretched out behind us are an insignificant eye-blink, and yet we do live in significant times. We humans are at our most destructive when money is not plentiful. In these uncertain times important decisions are made which sometimes carry catastrophic changes. The stunning Eastbourne Downland is up for sale. The local Council can raise a few million pounds from the sale. This might usher in a greater change to the landscape than has been seen since the land was first farmed. The new owner of the land here might recognise their importance as stewards of this ancinet landscape. They might recognise in the real light of day the importance of a commitment to manage the land in its time-honoured way: sensitive grazing after the summer carpet sets seed. If Eastbourne Borough Council cannot make this commitment on behalf of the people, the land is better off in safer hands, but the moonlight can be deceptive and instil fears which may prove unfounded.

Ushered back to the village by the hooting of tawny owls and buzzed by tutting pipistrelles, we agree that for all its beauty, the dark light of the moon can cast many spells, some of which leave us feeling less certain. 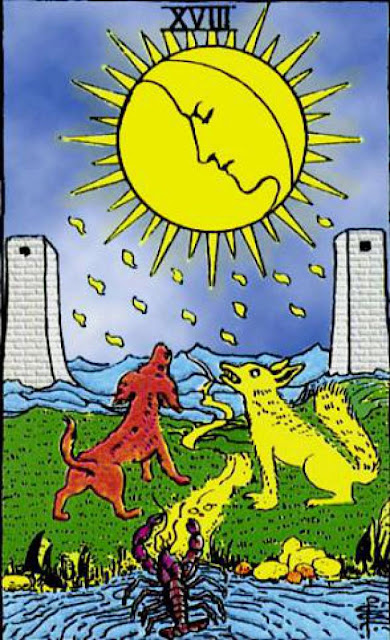 *"Everything lost on Earth is to be found on the Moon" is taken from Ludovico Ariosto's epic poem of 1532, The Frenzy of Orlando (Orlando Furioso).
Posted by Steven Teale at 20:13