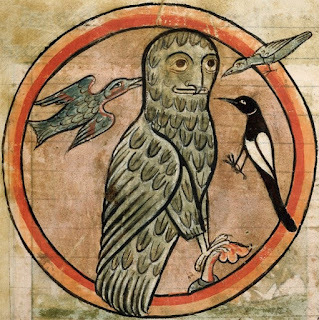 Walking the eastern downs is a relatively treeless and bird-light pastime, especially in winter. Gulls and game are often seen along with my indifferent friends the rooks, but there are sometimes few other species to keep them company, save for an occasional jolly of wagtails. It is always with great pleasure therefore that a walk takes me through the trees at Bishopstone with its abundance of ash, elm and sycamore alive from canopy to ground with avian chatter.

I set out a few weekends ago beneath a dark, clear, moonless sky to enjoy the late-November dawn. A gentle climb from South Heighton up to and along the crest of the Firle plain to Bo-peep, along the gentle sweep of the Cradle Hill escarpment, where the first pale light seeped out of the eastern horizon and, before heading home, a final plunge back down into Bishopstone and its wet meadows and trees. By this time the day had beaten the darkness away, the stillness in the air stirred by the dawn breeze from the east, and the robins and blackbirds had had their say, leaving the soundscape to later risers. Rooks and jackdaws could be heard from a distance in the treetops, their indiscretions a banner to all within earshot that this land belongs to them, the trees of Bishopstone Wood their palisade wall. 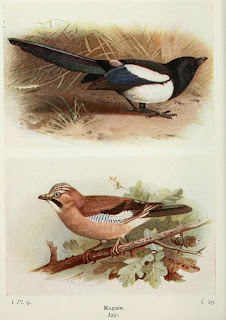 I skirted up and around the rookery so that I could climb and look down on the leafless canopy, swept clean the week before by the first winter storm of the season. Leaving the wet meadows behind me, I climbed alongside a scrub fringe towards what sounded like a disagreement involving jays and magpies. Jays established themselves here only in recent years, but have become a regular and welcome sight. A few weeks earlier I saw between Stanmer and Ditchling Beacon what I thought was a terrible disagreement between a mischief of magpies and jays. I suspected a raptor of some sort - a buzzard is often the subject of their scorn - but the pell-mell was hidden in the privacy of autumn leaves and I walked on without learning whether they were collaborating against a common foe or facing-off against each other. Seldom do birds muster such a cacophony as jays and magpies.

Today I was able to creep unseen up to the melee. As I rounded a bush the scrub opened up and I saw two jays, which straight away saw me and sat silently upright like children caught in the act of something naughty. The magpies, though, were oblivious in the pell-mell: ten of them screeching around the scrub. I stood still as a sleeping horse, hoping not to send every bird scooting into cover. Next, a surprise in dozens of mixed tits: great, blue and long-tailed, all busy uttering alarmed calls amidst the jays and magpies. The scene was chaotic, the noise confusing and wonderful to behold, like rough music! Not, then, a fight between jays and magpies; more likely cooperation on some level involving more species than I might see along all of the previous nine miles.

My question of where the raptor was hiding was quickly answered: it wasn't a raptor, but it was a predator and another recent arrival in the Rookery. A tawny owl broke cover low down, flew directly towards me and shot into the deep scrub just a few metres before where I stood, blowing my cover to all present. The corvids retreated to a safer distance and the tits melted back into the scrub edges. The owl, a creature which feeds on small rodents and insects rather than other birds, was now perceived as less of a threat than I. But there was no rough music for me, only a hush. 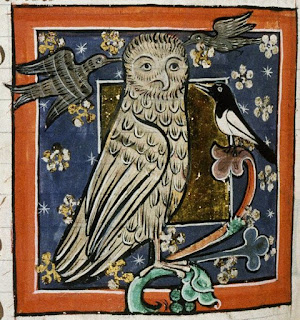 Rough music is one of folklore's popular rituals for dealing with bad behaviour, keeping a community safe, and something that might have been borrowed by people after watching birds like those before me. The origins of this might be found in the wassail - a similar ritual in which a cacophony was made to scare off evil spirits from apple trees before they were blessed at the end of Christmastide. A rough music ritual may have been popular with those dishing out the punishment, but it was less so for the person at the receiving end; a wife- husband- or child-beater. 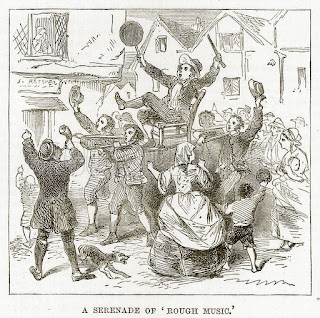 A noisy procession would be led after dark through the village to the wrongdoer's house, clashing metal tins or sheets and chanting along the way. The procession would stop outside the culprit's house and a chant was made warning them to mend their ways. Sometimes an effigy would be carried and burnt outside the house. The ritual would be repeated over several nights if required until the person relented. Sometimes they packed up and moved away, unable to cope with the naming-and-shaming and rejection by a close-knit community. With little else to entertain a village at night, rough music was an attractive pastime to those who might already have taken a few liveners at the local inn and this no doubt helped instil their determination to mete out a traditional form of justice, even in later times when told to desist by the local policeman. It was the peoples' form of justice and their right to give it. 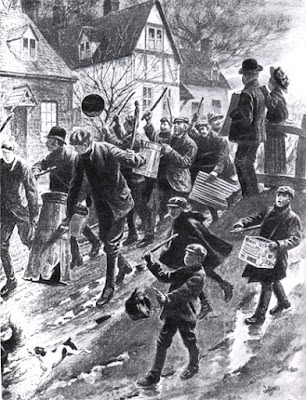 Rough music lives on today in the tradition of Bonfire. Everything is there: a culprit, the effigy, processions, chanting, loud noise, fire, the burning. Every Bonfire in Lewes gives rough music to politicians and the Pope, just at that time of year when the days darken and the world plunges into the long, uncertain, winter. A time when dark spirits walk the land.

Back at the rookery the owls have the trees only by night, their hoots answered only by the occasional complaining jackdaw or rook. There is no place for them during daylight hours, nor any place for people. The rooks and jackdaws, the magpies and jays and the little birds all give us rough music and move us on. Following the hollow way out of the trees, I headed out over open ground again. Amongst the rooks and gulls I counted a jolly of thirty wagtails bobbing along the drills.
Posted by Steven Teale at 12:27