A haunting at Burnthouse Bostall 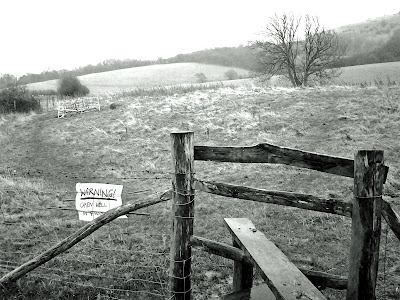 The well-shaft has been cordoned off with wooden stakes and health and safety bunting; it flaps in celebration of the well's return from the dead. It is darkening, damp; that rapturous time between Christmas and New Year when people pause to reflect on things gone, when the world is suspended and time teeters on the turning year, turning away from darkening days back towards the light and the return of life. 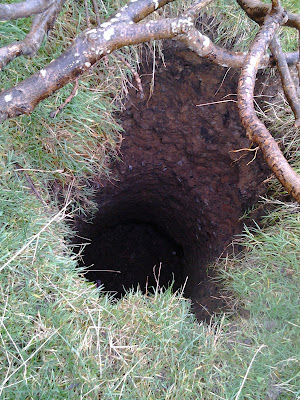 Three centuries ago the water left Burnthouse Farm and the well was a useless empty receptacle, it's flint lining dulled and silenced. As the water ebbed, darkness rose. Three centuries back, back beyond the eye of the archaeologists' census, this aged hole dug by hand, many hands perhaps, reaching down to life-giving water, where it sustained man and beast for a time, only to have left again to follow the springline elsewhere, cutting its life-blood, leaving the well-shaft empty, forgotten, capped and darkened. The forgotten well has come to light again now only when the light returned, when the water returned, both seeping back in, making heavy the waterlogged turf, the thin rendzina above the rotten timber well-cap, hyphae-riddled, weak and unable to resist the irresistible urge of homecoming, of stirred memory.

I was here once, I can hear the watery whisper recall as I ponder the hole. Someone deeply dug this shaft, toiled no doubt to urge pure water in through filtering chalk, at the spingline near the downland foot, water to sustain and give life, to keep the farmstead flowing. I was once here; the stirring of memory ripples through its calm progression, interrputing its silent cascade down the chalk to the wealden clay. It pauses and feels its way over the well-cap, trickles through the turf and humus, touching the timber, tasting the rot, settling its weight across to feel the void beneath. The heavy draw of homecoming is too great, the cap yields and the ground across the path becomes a well again. A rapture in reverse, a gift to us from above, from the falling rain.

Water forgot this place but its memory was rekindled. Without the water the well would have remained a secret beneath the light tread of walkers' feet. The water left, Burnthouse Farm died and all but the bostal forgot. But the water has returned and given the well new life, returned it to the people, to right a wrong, I fancy, that once killed a farm and sent its people away from this place of abandon. This is the water's gift. It doesn't need to dwell. It gives thanks to the toiling hands which once faithfully reached down to it. Without this water we might never have known the well. It haunts this old place so that we may know it. This is its gift. 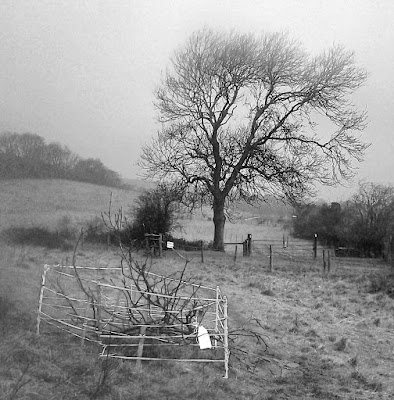 Sometime on 30th December 2012 a small patch of downland turf near the foot of Burnthouse Bostall in Westmeston, at OS grid reference TQ3221359, collapsed. Someone dragged a fallen tree across it. The ancient well was not previously known and was absent from the archaeological record. Heavy rainfall running down the chalk escarpment formed heavy waterlogged ground along its foot and the old well-cap could not withstand the pull of gravity. The Environmental Health out-of-hours duty officer built a cordon around the exposed well-shaft with the Chair of Westmeston Parish Council. I kept a vigil when my duty-officer shift began to ensure no further collapse occurred. I reported the collapse to the land owner (the National Trust) and reported the well's existence to the County Archaeologist, who confirmed that the well was unknown and therefore likely to be at least three hundred years old.