The dodgy weather during the first half of the week meant that I didn't get out until Thursday lunchtime. There was a decidedly autumnal feel (if it's not stating the obvious) and the sun hadn't burnt off the previous night's dew despite a sunny morning, such is its lack of strength in late October. Butterfly activity was low and I saw only twenty in total (six species), as follows: 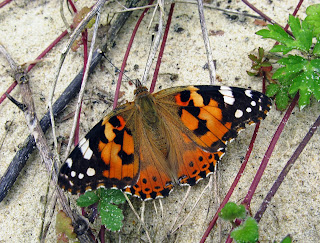 This week was the final week of the official survey season, but Dave usually continues surveying until butterfly activity settles down for the winter. The butterflies are now mostly confined to the sheltered footpaths and areas with ivy still in blossom, but there are still opportunities to find them when it's not too chilly. Small Tortoiseshells and Peacocks have probably already flown into the Fort's tunnels to overwinter and my next surveying activity will be in mid-December when we make our first winter count in the tunnels. Until then it's back over to Dave and the Gang to see what's still active above ground. At least it will take longer for the ice cream to melt!
My attention will now focus on collating all the data we've collected this year and compare it with previous years. This will take some time but I am hoping to have the year's results ready to share at the December meeting.

I am also continuing work this winter on the nature reserve's 'Super List' as we approach the fifty year anniversary in 2021 of the first formal records made along the Newhaven clifftops and slumps. The list will eventually include every known record ever made at the site and there are some impressive recorder names already on the list, as well as some impressive species, not least the Mediterranean Oil Beetle (Meloe mediterraneus) which was discovered earlier this year. The list will be a valuable resource when it is completed (hopefully by winter 2018/19) and I hope it will inspire additional recording effort.
Posted by Steven Teale at 23:04