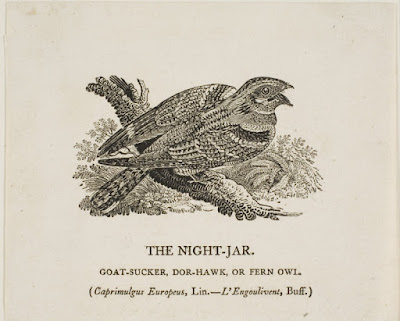 The woodsmen of the Sussex Weald walked out of the trees long ago now, taking their coppicing tools and charcoal burners with them and leaving their woodland clearings to the relentless green succession. This Wealden wood is a remnant of the great Andredesweald forest of the South Saxons – Lindhersse to the Normans, who gifted it to Battle Abbey and rechristened it The Abbot’s Wood. Banks and ditches and great marker trees offer clues to the antiquity of the place. The Forestry Commission is the current steward of the trees. Dark conifer plantations have been felled and replanted with native broadleaved oak and hornbeam interspersed with hazel, sallow and birch. Dormice and Pearl-bordered Fritillaries are two species who benefit. We are visiting this twilight to find another: the fern owl, goatsucker, dor-hawk of country folk; Caprimulgus europaeus to science; the nightjar.

The sun has set; the full moon has risen but cannot yet be seen above or through the encircling trees. A breezy day has beclamed and the hazy sky softly glows in a palette of pastel shades. With a growing sense of expectation, we step into the gloaming. There is light enough to spot warblers and thrushes still feeding their nestlings. A great-spotted woodpecker emerges from the trees. Moths rise earlier here; I follow Agapeta hamana until it settles, Cochylis lacunana too.

We zig-zag our way along narrow woodland rides until a gap opens out into a wide clear-felled area. Blackbirds, song thrushes, nightingales call across territories; distant corvids pass; gulls make their easy glide coastbound. Low cloud is hugging the downs and the weather there is less clement there than here. I give silent thanks. We meditate to the thrushes’ poker song (I'll take your notes and raise you something slightly more complex. Well I'll take yours and do the same). From above and behind our right shoulders a large, silent silhouette glides across us. Its long tapered wings, an underside speckled white and dark, the unmistakably-shaped face. Our first nightjar – a female – appears and is gone almost before we know it. The time is not much after nine. Low to the south the small full moon is glowing through a wash of gossamer cloud.

In the distance the churring call of one or more nightjars waxes and wanes, undulates, stops, begins again. It is almost a growl. The name: nightjar; I cannot help but hear the woodsmen of old call the beast noightchurr as they made their way home from the clearing, leaving the gloaming beasts to the tightening murk. It is their time of day, not ours. No wonder it's the stuff of myth, a beast that sucks the milk of goats. Sometimes it's too dark to tell what the truth is.


The appeal of this bird skulks in the twilight, the enigmatic hour of shifting shadows, wherein mysterious beasts lurk. Winter is spent in Africa, south of the Sahara. A recent study found that British nightjars migrate to and from the Congo. It is close to ten now and we begin making our way home.


The path is a black ribbon. Dark clods plop around us in the murk, small toads on closer inspection. Approaching home we are diverted by screeches from a large oak which splays its branches above the path. They are tawny owlets, two of them. Close by and louder, the churring resumes in a clearing behind the big oak. One, then two or more churrs pulsate through the air before trailing off into silence, then a wing-clap, then the silhouettes of a first, second and third nightjar swoop around us. It's a perfect coda. 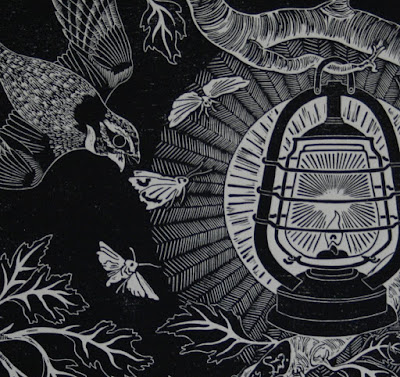