Wonders of the night sky

I have risen early to view a celestial wonder: a line-up of objects low in the south sky. A waning moon, the red giant Antares, Ares itself (Mars), Jupiter and Saturn. This event is well worth an early start. Frustratingly though, the cloud clearing from an overcast night has not fully dissipated and clings to the southern horizon.

There is, however, as I turn my attention to the contents of my moth trap, another line-up of phenomena that has been rare of late. For the first time in weeks most conditions for good moth activity were met: an overcast sky with light winds and a reasonable temperature which held up after sunset. For days on end I have opened empty traps after stormy nights, making do with occasional wind-blown moths clinging to fences or grass-blades. The pressure amongst the local moth community must have been building behind a bottle-neck of Atlantic storms, waiting for their planets to line up until finally, last night, the cork was popped, the blue touchpaper lit and it was party time.

Those celestial fireworks forgotten, I delight instead in a meteoric rise in moth numbers. There is a tiny, delightful, if dourly-named Brown-spot Flat-body (Agonopterix alstromeriana) perched on the lip of the trap; a behemoth Oak Beauty (Biston strataria), its wings an embroidered quilt of lichen; several Early Grey (Xylocampa areola), which blend in almost perfectly with the paler egg trays I line my trap with; but the numbers are dominated by Orthosias – the genus of springtime moths which belong to the largest family of British species, the Noctuidae. The egg trays are peppered with Common Quaker (Orthosia cerasi) and Hebrew Character (Orthosia gothica) and interspersed with Clouded Drab (Orthosia incerta) and Small Quaker (Orthosia cruda).

In the season when woodpigeons boast again from morning rooftops, when the wren rediscovers its voice and when tits show renewed interest in our nestboxes, so too do we begin to encounter many birds' major nourishment, the moths. There are earthly pleasures to delight in. My catch of wonders from that space between Earth and the heavens, their names and numbers recorded, will spend the day in safety before flying off at dusk back into the night sky. 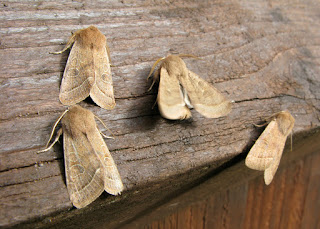 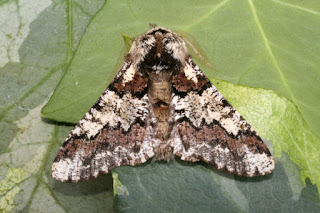