Pell-mell and pain at The Rookery 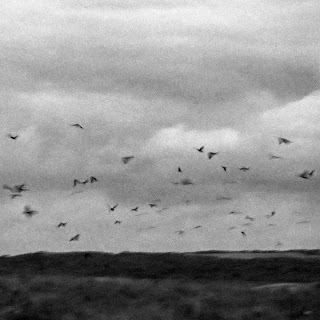 I timed my evening walk perfectly tonight. The sunset was gift-wrapped in a ribbon of flame-orange cloud which glowed parallel with the western horizon. It wasn’t quite the flamingo hour that Virginia Woolf wrote of, but this wasn’t smog-filled London but the comparatively clean-aired Sussex coast. I took my usual route with the dogs: along past the paddocks of Foxhole Farm and onto the promontory of Rookery Hill, down to the levels below and back up through the wood towards lighted windows and home.

Perfectly I timed things. From the Foxhole paddocks I could see a surfeit of rooks and jackdaws causing a pell-mell in the sky above Rookery Hill. It’s a common meeting space where birds from more than one rookery seem to assemble before dispersing to their roosts. I walked straight into their party and they took tumbling to the sky again in a startling number – more than I’ve seen here for a long time. Their evening wasn’t yet done and they regrouped energetically on the meadow a little further along the hill. Their black silhouettes in the east sky contrasted and balanced with the flaming ribbon to the west.

Over and down Rookery Hill to the Bishopstone Road, past lonely lights which light the road for only the occasional rambler, through the gate and we plunged into the low meadow, wading into the gloom beneath the trees. A silk mist was draped across the grass; above, everything was black or a deepening blue. Further up the hill the party was in full swing: the distant cacophony of rooks and jackdaws as they flew in wide brush strokes across the sky. A large group of jackdaws, perhaps a hundred or more strong, played like starlings or homing pigeons across the sky while rooks rode a fresh easterly wind high, high up – hanging and hovering like raptors. This swinging party was all up the far end that I would pass beneath after five or ten more minutes walk. A small bat passed overhead, a pipistrelle of some sort; then a larger, unknown one, too big for a pipistrelle.

They are an endless source of fascination, these rooks. Away from the helter-skelter, at the bottom end of the wood and just above where I stood, a quite different gathering was playing out. The skeletons of the dead diseased elms are often empty, but occasionally their stark silhouettes hold a few birds perching on bare branches. Tonight the lifeless, stricken body of a dead rook was caught in the uppermost branch of one tree. It appeared to be skewered shrike-like onto the branch, like a snagged kite, but it was more likely that it had fallen with wings open and become snagged by the crook of its wing around a branch. Its lifeless body flapped pathetically in the breeze it had once commanded. A short but respectful distance away from the bird sat a group of sullen rooks, in their usual mourning black. Two magpies passed through close to the dead bird and one of the rooks darted at them, cawing angrily and demanding that they keep a respectful distance. It did the same to any other passing bird, then flew back to its perch ten metres distant. Other rooks joined it and sat quietly. It was in complete contrast to the festivities at the other end of the wood, which continued oblivious to this sad scene. I swear these birds were holding a vigil. The bereaved bird kept his or her place on the branch; others joined it, sat quietly for a while, some remained the full while, others passed on to be replaced by new birds, well-wishers, grief-sharers. The breeze slowed to nothing momentarily, as if the world had paused in that space between an in-breath and out-breath, or between an out-breath and in-breath. Slowly and respectfully, it resumed. All the time, those few rooks sat like silent black points marking a punctuated life. I didn’t know at that moment if I’ve ever seen such a sad sight: anguish before me balanced by jubilation at the other end of the wood. I stood and watched in silence with the dogs until the silhouettes melted into the night. Those few constant birds were still there when it became too dark to discern them.

Another bat passed just above my head, now only a hint in the darkness. A strong thirty mile breeze is forecast tonight. I wonder whether the dead bird will take its final flight in this breeze, spiralling down through the trees onto the leaf litter below, seen only by the fox, or whether that other bird, its companion or mate or parent, will keep its vigil until then.

From behind me the breeze carried the scent of pipe tobacco of the type I recognise from the old men’s pipes of my childhood. One of my dogs growled at something unseen upwind but I could see, hear or sense nobody. Perhaps it was one of the ghosts of the old harbour side; perhaps it was an aromatic log on a fire in the village, carried along by the strengthening breeze, easterly yet warm enough to feel no chill even after dark.

We passed silently through the calm of the low meadow and back up through the trees. In the canopy above the party was over, the birds safely tucked away in their roost with only the occasional caw from amongst the branches. The party was over for another night. 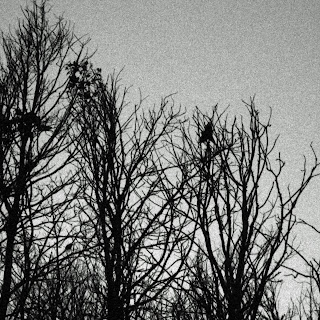