Migrant butterflies and moths at Newhaven: the last five years of recording

I have taken a look at all the migratory butterflies and moths that I recorded in Newhaven between 2012 and 2016. The results are in the table below, which gives an overall total for each species for the five year period, a per annum average for the period and the annual total of each species from 2012 to 2016. The species in the table are organised in order of abundance over the five years.

Why do we see immigrating butterflies and moths and how do they get here? The thing with migratory insects is that the numbers seen on our shores are unpredictable from one year to the next. Some of the factors which influence the numbers of adults seen on UK shores are the success of each species in the previous year, the environmental conditions and survival success of the early life stages in their native land, the number of adults which migrate and the weather conditions during migration. For this reason, numbers seen in the UK tend to vary wildly from year to year, and this can be seen in the table below. Additionally, geography and location should be a consideration. I feel that Newhaven is at an advantage because of the Ouse Valley, which some species might use as a navigation aid. Other species such as Painted Lady congregate on hill-tops and the crest of the Bishopstone escarpment, which rises just north of the Buckle in Seaford and runs northwards along dry valleys toward the downs above Beddingham, is a good location for this species along with Diamond-back Moths and Rush Veneer.


Another important caveat is recorder effort. If more effort is made one year and less another, this will affect the total numbers seen, so consistency is important. Recording methods can affect the results in a similar way. For example, a transect walk survey has been performed each week between April and September throughout the five year period. The walks are regulated by a code of practise which helps to achieve a consistent approach, so the data collected during the walks are of a high quality. Of less reliable quality are the numbers I have recorded at home in my moth trap. I have been more or less consistent in my approach during the five year period, but there are two considerations when analysing the data. Firstly, I changed the light source in July 2013 from a 2x30W actinic light (a type of UV light) to a 125W MV (mercury vapour) light. This is a significant change because many species are more strongly attracted to mercury vapour light than actinic, and this has been reflected in the results since the change in July 2013. Second, the number of nights that I have operated my trap each year has varied, as follows: 155 nights in 2012, 176 in 2013, 211 in 2014, 205 in 2015 and 209 in 2016, meaning there is a slight upward trend. This, too, will have influenced the data.


One final consideration is that data collected at one geographic location (Newhaven in this case) cannot be representative of other locations and should therefore not be used as an indication of general abundance. It is a little like looking into a rock pool and assuming the same stuff will be found in every one. It isn't. However, large immigration events do tend to have a regional impact that produces similar results for some species at different recording stations.

Looking at the table, the species in first place is the Diamond-back Moth (Plutella xylostella). Immediately we see the point proved about wild fluctuations from one year to the next. Last year (2016) was an exceptional year which saw a colossal immigration of probably billions of these moths. It feeds as a larva on crucifers (cabbages), so the immigration was not welcomed by farmers or gardeners. Bearing in mind that the moth is tiny (about 7mm long), it amazes me that it is able to fly any distance at all, but it is carried in large air masses long distances from its continental homeland.

There are a number of species which are regular migrants each year, including the Clouded Yellow (Colias croceus), Red Admiral (Vanessa atalanta) and Painted Lady (Vanessa cardui) butterflies and the moths Rusty-dot Pearl (Udea ferrugalis), Rush Veneer (Nomophila noctuella), Silver Y (Autographa gamma), White-point (Mythimna albipuncta), L-album Wainscot (Mythimna l-album), and Dark Sword-grass (Agrotis ipsilon). Of these, most had an average year in 2016, but Rusty-dot Pearl, Rush Veneer and Silver Y had a significantly above average year. The Silver Y famously made the news when one landed on the footballer Ronaldo’s face during the European Cup Final in July. It became an internet sensation (#mothonface). It should be noted that some of these species are also considered to be transitory residents (i.e. they gain a temporary foothold in the UK and breed successfully for a year or more before colonies succumb to environmental shocks). For these species (White-point, L-album Wainscot and Dark Sword-grass) the southern UK is at the very north of their range and they might form resident coastal populations in the future as a result of climate change. The L-album Wainscot has been breeding along the coast in Newhaven for some years.

The species which cause excitement in varying degrees when they appear include the Oleander Hawk-moth (Daphnis nerii), Blair’s Mocha (Cyclophora puppiliaria), Vestal (Rhodometra sacraria), Ni Moth (Trichoplusia ni), Bordered Straw (Heliothis peltigera), Small Mottled Willow (Spodoptera exigua), Clancy’s Rustic (Platyperigea kadenii), Oak Rustic (Dryobota labecula) – which is actually colonising eastwards along the south coast, Flame Brocade (Trigonophora flammea), and White-speck (Mythimna unipuncta). Most of these have appeared as singleton
sightings on very few occasions. The Vestal (Southern Europe and North Africa) and Small Mottled Willow (Europe) have behaved similarly by not being seen at all in three of the five years, but with a spike in numbers in 2015.


The star of the show is the Oleander Hawk-moth which made its first appearance in Sussex for about 25 years when it appeared at Newhaven Fort in 2014. At least three were seen in Sussex in 2016 (including one mentioned below), but this is a moth of North Africa and Mediterranean islands, so do not expect it to become resident in the UK any time soon! It is a truly stunning moth and one of the best examples of how the beauty of moths can surpass that of butterflies.


I must confess that the Oleander Hawk-moth record is not my own; I am only the Determiner (I identified the moth for the person who first reported the sighting). It is included in the list because I curated the record on behalf of the staff at Newhaven Fort and passed the specimen, which was found dead after several days at rest on a wall, to the Booth Museum of Natural History in Brighton. Not included in the list is a second Oleander, which was seen in Seaford in October 2016. Again, I determined the record but this time I put the recorder in touch with the County Recorder.

Two other hawk-moth species were seen during the period, the Convolvulus (Agrius convolvuli) and Hummingbird Hawk-moth. The latter, an impressive day-flyer and favourite of many people, has been seen in disappointingly small numbers each year, but one of the brace seen in 2015 was fascinatingly an overwintering adult which I saw in a vacant house away from the coast in Lewes. The Convolvulus Hawk had never been recorded at home before 2015, but it has been seen during the past two years.

Numbers will continue to surprise and delight each year and this is one of the pleasures and privileges of recording moths by the coast. 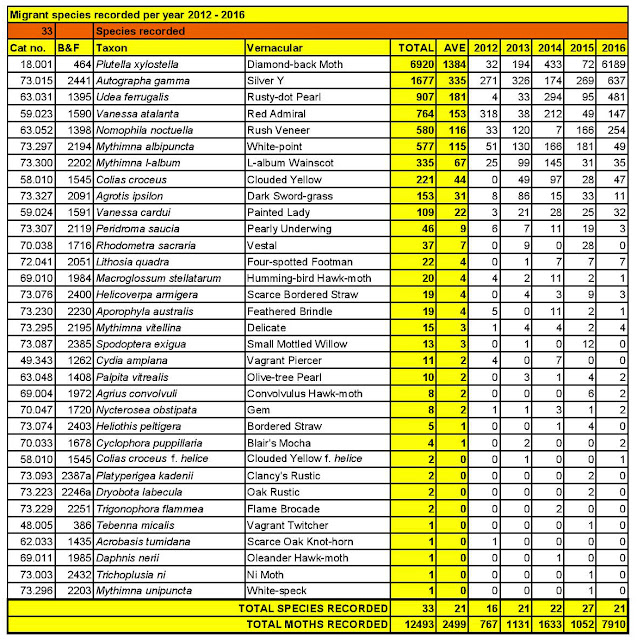