Wassail! Norse (Wæs þu hæl) meaning "be thou hale", "be in good health". 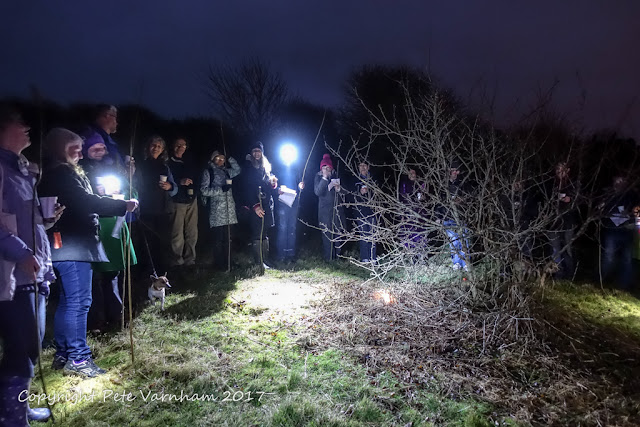 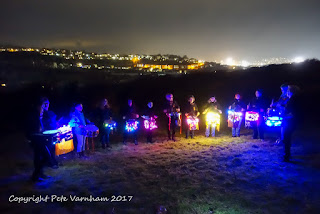 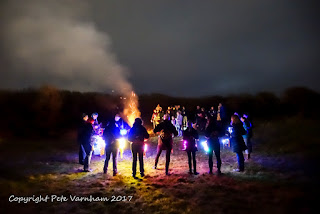 On Saturday 7th January we held a wassail around an apple tree on the nature reserve. The Earthquake Drummers led a procession of forty people, their drums lit with colourful lights that made the ground glow as they scared away any dark spirits hanging around in the gathering dark. We formed a circle around the apple tree, which we found amidst a thicket of scrub a few years ago, thrashed the tree with hazel whips to wake it up, blessed it on the command of the Wassail Queen with toast dunked in apple punch, and chanted a wassail verse before withdrawing to the fire for some spiced apple punch and wassail cakes. It was chaotic, mysterious, noisy, smoky and wonderful fun.


When I began to research wassailing I thought we were going to resurrect a forgotten ancient seasonal rite. But wassailing is alive and well and becoming popular again. It's practised on many occasions throughout the year. Like Rough Music, the Wassail has origins that have become dimmed in the depths of time. Pagan, Roman, maybe older, wassailing evolved over the centuries from what was likely to have been a serious sacrificial ritual, a ritual which helped to cultivate confidence in a good harvest at the end of the growing year, into an excuse for a cider-steeped social from one orchard or farm or garth to the next.

Twelfth Night is the traditional wassailing time of year, but there are plenty of examples elsewhere on the calendar; there are echoes of the wassail on Halloween, Bonfire Night (Penny for the Guy) and carolling (God Rest Ye Merry Gentlemen goes to the same tune as many wassailing songs). It is fascinating how time and belief blurs the edges of things, borrows from one and transforms into another. How comforting it is to us humans to join together and make noise and light at the darkest times of year. I think we'll do it again.

A-wassail, a-wassail throughout our town,
Our bread it is white and our ale it is brown.
Our wassail is made of the good ale and cake,
Some nutmeg and ginger, the best we could make.

Our wassail is made of the elderberry bough,
And so my good neighbours, we'll drink unto thou,
Besides all on earth, you'll have apples in store,
Pray let us come in for it's cold by the door.

A-wassail, a-wassail throughout our town,
Our bread it is white and our ale it is brown.
Our wassail is made of the good ale and cake,
Some nutmeg and ginger, the best we could make.

A-wassail, a-wassail throughout our town,
Our bread it is white and our ale it is brown.
Our bowl it is made from the elderberry tree
With our wassailing bowl we'll drink unto thee. 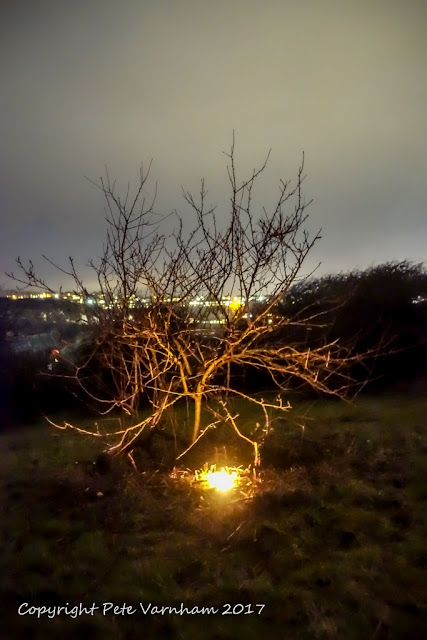 All photographs courtesy of Peter Varnham.
Posted by Steven Teale at 19:28