Heartland Walks #3: Ghosts of the Harbour 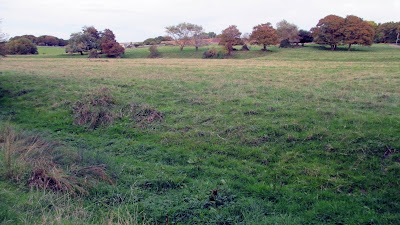 Familiarity leads not to contempt, but to renewed astonishment.
With familiarity, from the known is yielded the unknown, the seen the unseen, the heard the unheard.
A flood of the senses by the rising ghost tide.

The artist Simon Lewty wrote that "the same walk can mean something different each time it is made, so that familiarity may not lead to contempt, but to renewed astonishment, as the known yields up the unknown"1. I felt renewed astonishment with my discovery of the relics of the old tidal harbour at Bishopstone, the scars of the old creek that run in a loop which joins the dots of five ponds in what is now a damp pasture. Countless times have I walked around this meadow and many times have I looked and wondered at its curious ditches and embankments, but always only in isolation and never before seeing it as a whole system, a system which carries downstream, away from the village and on towards The Buckle, beyond the causewayed coast road and Seaford branch line, beyond into the scars of the old Ouse, towards the sea.

The shallow cleft has been present every one of the thousand and more times I walked through the meadow, hiding in plain sight, unnoticed. Two hundred and seventy years ago I would have been waist-deep in ooze. Today it is a mere suggestion, fragmented into a necklace of damp hollows and seasonal ponds, some not much more than big puddles distressed by cattle-hoof imprints which makes my own passage tiptoe teetering and treacherous. Events downstream repurposed this from a place of departure and return into a place where the twice-daily tidal heartbeat has slowed-slowed to a seasonal ebb and rise of wet and dry, winter and summer, watched over by the resident cattle and transient walkers and dog-walkers. The twice-daily tide has been reduced to a once-a-year event.

Today I choose to dwell a while, to trace the loop of the channel and chart a meandering course where boats once negotiated the shallows. Where once the flow would have scoured clean the channel, now there is a detritus of things stranded in space and time. The ruins of a concrete drain float on the surface, perhaps shattered by the seasonal heave of wet and dry ground. It could be a hundred year-old drainage improvement effort. There's a flotsam of wooden posts and planks that might have been fences or bridges that once spanned the channel. Glass bottles and flints from the decaying wall bob up and down in the shallows. After the hottest, driest summer in years, the ground here, where once redshanks called their melancholy ‘teu teu’, still remained damp enough to sustain a carpet of redshank - that dense matted flower of ditches and damp places. So the bird has become the flower.

I pause and listen to the birdsong: jackdaws and rooks and woodpigeons above, magpies, long-tailed tits, a chiff-chaff, greenfinches, a great spotted woodpecker. Creatures of the wood.  Where once rain would have fallen into the creek and flowed downstream, now a large beech – surely one of the Duke's beeches, planted after the water receded – rains its mast into the channel, slowly filling it. Two grey squirrels dart around its base where once grey mullet swam. A large owl nest box has been fixed to a sycamore trunk. I've never noticed it before, tucked away beneath the lowest boughs. Somewhere in the boughs above, the tawny owl calls as I discover this little secret of the wood’s edge. Perfect timing! To my right, low across the open meadow a sparrowhawk sweeps in attack. Then a grey heron glides in - that's more like it! And then a moment of eerie and wonderful splendour: the bubbling ripples of a curlew’s call, somewhere in the near distance, unseen but up there on shivering wings, the call ‘cour-lee’, truly a song of the heart.  The sound echoes through the trees with a moment's sustain, gaining in urgency: ‘troo-ee troo-ee trrroo-eee’. For a moment the air boils, then falls silent and they are gone. The ghosts of the old harbour are bubbling up through the ground like a wellspring and I have sunk knee-deep into its memory simply by pausing here for a few moments. This land is willing to yield its secrets to anyone who cares to ask.

The long wave of the last tide ebbed away from this place 250 or so years ago. The harbour may have gone extinct, but the wet never quite left - it has lingered as a half memory, a half-remembered purpose it once held here, a shade or an imprint. The water haunts the meadow, benign in summer and autumn, resolute in winter and spring; the almost imperceptible year-long tidal ebb and rise. Global sea levels have risen by about 20cm since 18802. They are predicted to rise this century by about a further 65cm3, many studies suggest as much as or more than one metre, as oceans continue to thermally expand and ice sheets melt. This rise might not revive the little harbour, but it would allow the water back in and restore it as a more dominant influence4. It might push people further from it and encourage the return of wading birds and wildfowl. The distant curlews' call may yet return here, but for now I have to walk on towards the Ouse floodplain to find them.