Two years of walking the line 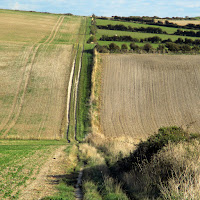 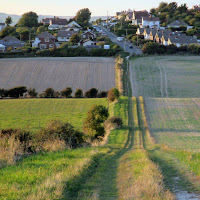 The straight line from Falaise Road

I am nearing the end of my second year of weekly wildlife surveys along a line of farmed land between Denton and Bishopstone. The idea arose from a route I traced home two years ago this month from The Crouch in Seaford, which I was able to follow along a more or less straight line of footpaths. This path is stair-rod straight between The Crouch and the parish church of St. Andrew in Bishopstone – St. Andrew being the patron saint of fishermen. A little digging revealed that The Crouch in Seaford was once the site of a medieval market. The name ‘Crouch’ is derived from the Latin crux or cross: the market cross. The Crouch is located close to the coast where the course of the river passed by and other adjacent areas of low-lying land hint at the possibility of a harbour through which passed market goods: coastal and continental imports and locally-caught fish, which might have been brought along the similarly named Crooked Lane. The market ceased in 1712, when the former Cinque Port was in decline and the course of the Ouse had shifted further west.


Only at one point along the route through Seaford did I need to deviate from the line: a private house in Stafford Road ironically named The Gatehouse now blocks the way, whereas once, as the name suggests, it didn’t – except perhaps for those who didn’t know the magic word. The Gatehouse is at the top of a steep bank. The notion of history hiding in plain sight utterly compels me. The emergence of this trackway between the medieval market in the old parish of Sutton, close to Steyne Road – the stony place - to the parish church of St. Andrew in Bishopstone, which itself is linked by a nearly straight line to the parish church of St. Leonard in Denton, was a source of great excitement. So I celebrated its rediscovery in the way I know best by dedicating a wildlife survey to its memory!

The true reason for creating the weekly transect survey along this stretch of land was to study the impacts of intensive farming activity upon the insects, and to evaluate the importance of headland flora using butterflies (and moths) as an indicator. How better to do this though than to use ancient trackways that our ancestors used to travel to and from places of worship and commerce? I am using them instead to commune with nature.

I began the inaugural walk during the first week of April 2017 not yet having chosen the exact route; I decided that I would allow the land to decide where I should walk. The original idea that I would record butterflies on a weekly basis between April and October along a straight-lined route quickly evolved into something approaching a narrow ellipse.  At the end of that first walk I had traced a route from the end of Falaise Road in a roughly south-south-easterly direction beyond Foxhole and Stud Farms, as far as the gate at the bottom end of Rookery Hill by the Bishopstone village road, then back uphill beyond four tumuli as far as the kissing gate which separates Rookery Hill from Norton Hill. Incidentally, this kissing gate is situated on the banks of the northern-most tumulus, which was adapted during medieval times to act as the base of a mill. The route takes me along headlands abutting intensively-farmed fields and skirts the edge of improved pastures at Norton Hill and Rookery Hill. The headlands are razed to the ground each summer just prior to the harvest. Norton Hill is a recovering ‘improved grassland’ pasture, which is still moderate in terms of biodiversity, but with no recent fiddling and grazed by a small cattle herd, a flock of sheep and occasional escaped Dartmoor ponies. A mixed sward is slowly establishing itself year on year. Rookery Hill is an ancient landscape, formerly a promontory bounded by the Ouse floodplain on three sides, lately though an un-grazed meadow improved with fine grasses such as fescues and is cut for hay each June, approximately (but not intentionally) in phase with the interregnum between the first and second broods of the Small Heath butterfly. Neither meadow is rich in flora or fauna, but the tumuli act as an archipelago of tiny stable grassland habitats for mixed flora and insects. I have found previously unseen Silver-spotted Skipper and Adonis Blue butterflies in small numbers, as well as a good colony of Small Heath in these pastures. The latter species has been the undisputed monarch of Rookery Hill during the first two years of the survey.

The tumuli are bowl barrows, believed to be 3500 to 4500 years old. This is what Historic England has to say about them:

Bowl barrows, the most numerous form of round barrow, are funerary monuments dating from the Late Neolithic period to the Late Bronze Age, with most examples belonging to the period 2400-1500 BC. They were constructed as earthen or rubble mounds, sometimes ditched, which covered single or multiple burials. There are over 10,000 surviving bowl barrows recorded nationally, and …the bowl barrow on Rookery Hill survives well and … is one of the best examples of this type of monument to be found on the East Sussex Downs. These prehistoric barrows are the earliest known structures on Rookery Hill, and … provide evidence for the continuity of burial, settlement and agriculture in this area of Downland over a period of at least 3000 years.1
Today I followed the route with Leo and Charlie; they are helpful in flushing up butterflies and especially so the small heaths. It was a warming day, sunny with a light northerly breeze. The sky was grazed by a hundred contrails, suggesting the air was freezing cold at aircraft level. Even after several hours of sunlight, the longer grasses were still soaked with dew and some parts of the route were still in shadow. The diminishing power of the sun is evident in these places. All morning a nauseating hydrocarbon stench – surely the exhaust from Newhaven’s industrial centre? – had been carried downwind by the breeze and it wasn’t until nearly halfway that we’d moved beyond the plume. As I looked back I realised I was wrong: a dark plume of smoke was rising from Denton Wood, somewhere near the stable yard on The Crescent track. The smell was quite disgusting and probably not at all healthy.

Only the hottest patches along the route seemed to have attracted butterflies. The very start was the only part which had any activity during the first half, with the usual flurry of Large and Small Whites blousing their way around the hedges and scrub. These today were joined by a pair of Clouded Yellows and an inaugural record for the transect of Mallow Moth, which I followed for some minutes before it allowed me an approach close enough to gain a positive ID. Plenty of its food-plant lines the headland path. It was quiet otherwise; even the ivy bees nectaring on ivy blossom seemed fewer in number. The lack of Red Admirals was again noticed by their absence. Where I have counted 40 on a particular ivy patch in the past, today I saw none. This is proving to be a poor year for them, possibly because of the hot, dry weather in July.

The path along the field headlands was an insect desert. Birds in the paddocks at Foxhole Farm included a fair flock of Meadow Pipit with a few Pied Wagtails and Linnets intermingled. A Sparrowhawk circled overtly, high above. Occasional buzzards soared lazily on thermals higher still. The final section of the transect route is usually the most active, and so it was today. As Rookery Hill descended towards the floodplain below and tipped the angle of the ground sunwards, beneath the airflow, the additional heat hosted the only Small Heaths seen along the route – a pair close together. It was a day of pairs: two Red Admirals skimmed past with purpose and, by the largest of the four tumuli, a pair of third-brood male Wall Brown were alternately basking on hot dried grass patches and sparring in tight circles before suddenly and violently breaking apart. I lingered for a little while and noted that the pair would spar two or three times each minute. This must be an exhausting activity.

The temperature was rising on the way home to nearly 20°C and this encouraged a few more insects into action: a pair of Silver Y moths and a few more white butterflies. Adult numbers though are settling down for the winter now and there must now only be a few more weeks left in the survey season.