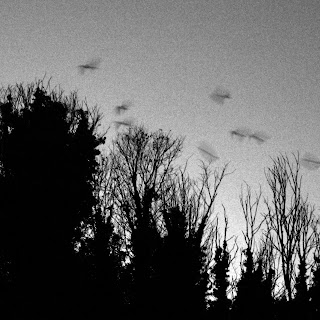 I was running late in giving my dogs their evening walk and caught the twilight by mistake. It was a beautiful early October night, still and strangely quiet, sun already set, moonrise hours off, and the horizon a peach ribbon falling into the Channel. The sea seemed to have a glow about it which seemed, impossibly, brighter than the sky above it. It’s blank canvas was interrupted only by the thin black lines of the Breakwater and East Pier framed by three small boats with night-lights aglow.

Honks from the east heralded an approaching skein of greylag geese, which flew up over the Rookery Wood canopy. Something innate compelled me to count them. There were fifty three in a tatty v. The geese have become familiar again; first seen a week ago, I saw them pass over twice today: morning and night, but both times heading west, probably to the pond at Piddinghoe. One of the heralds of winter are these passing skeins. I can imagine the invisible veils of winter being dragged behind by each skein, one after one, layer upon layer of winter slowly building, suppressing the warmth of the season, imperceptibly. Sinking its chill into the ground to emerge after its autumnal aestivation is complete.

The geese diffuse into the darkness of the Ouse valley and are gone. As we plough on we disturb the rooks from the ground before us but, instead of flying to the Rookery’s trees as they usually do, they split into two streams, one of which steers away from the trees and to the north. I’ve witnessed this before and can think only that these are visiting rooks, family members expatriate of the Rookery. Whereas the greylags are a seasonal delight, the rooks are the exemplar of a renewed astonishment won by means of familiarity. I’m reminded of a poem by Herman de Conick entitled Just as this Island Belongs to the Gulls and I adapt it for the rooks in their Rookery Hill promontory, jutting out into the old harbour waters below:

Those rooks hold a lifetime of renewed astonishment in store for me. In these moments my heart and its veneration belongs to the rooks.

We plunged down Rookery Hill and into the floodplain, slipping into the old harbour via the narrow aperture between a gate and post and we were borne into another world. The white noise of distant traffic was absent, the dense quiet broken only by the chirrip chirrip of dark bush-crickets. The cacophony of rooks and jackdaws in the canopy above has quickly settled into silence tonight and too is absent. Crossing the meadow beneath the fringe of Duke’s Walk trees, the gloaming meadow studded with silhouettes, a glow emerged in the distance, low down, prostrate. This old harbour and its ghosts! Those damp hollows and redshank beds which hold beneath their surfaces the memory of the old creek were giving up their waters in the long wave of a rising tide, serenely and kindly haunting. I fancy that I have been allowed in to become part of the re-enactment, perhaps to acknowledge my curiosity in the route of the old creek. I played along and imagined walking knee-deep through its waters, wading to the harbourside, watched perhaps by a silent owl in the boughs above. If the breeze hadn’t been holding its breath still, I swear the salt scent of seaweed would have hovered with the mist as I passed through.

The kissing gate on the far shore opened silently and gave into the dark hollow within the trees as Dukes Walk ascends towards Norton Top. The kissing gate at the top of the wood gives out into open air and, as if we have passed through and back up the rabbit hole, we are back in the world again, beneath Ursa major, chasing the bear home like Orion with my two dogs, my feet as dry as when I first walked out.